It’s not uncommon for your four-wheel drive to make strange clunking noises, especially when turning, accelerating, or when engaging 4WD mode on the fly. This article explains how to troubleshoot the potential components that are prone to failure and which should be inspected immediately when you experience these clunking noises.

Why does your 4 wheel drive clunk? There are many drivetrain components of a 4-wheel drive that can cause a clunking sound when worn, loose, or damaged. These include and of the following components:

The loud clunking sound can also emanate from your transmission when you engage 4-wheel drive on the fly over a certain speed. This is caused by the gears inside the transmission case as they engage to lock the front and rear driveshafts.

This article will discuss the causes of the loud clunking sounds and possible solutions. There are quite a few reasons why your four-wheel drive could give off these audible sounds when turning and accelerating and even when engaging 4-wheel drive. The next part of this article will discuss the possible cause when the clunking effect happens when turning.

Next, let’s diagnose the clunking sound when turning.

The first and obvious cause of a clunking sound when turning is a CV joint failure. This can be caused by a host of reasons and is the most common cause of clunking sounds emanating from the front of your 4-wheel drive.

What is the function or purpose of the CV joint? Here is a short extract from an article you can find here.

CV joints are Constant-velocity joints (also known as homo-kinetic or CV joints) which allow a drive-shaft to transmit power through an adaptable angle to the wheel, at constant rotating speeds, without any noticeable increase in friction or play.

So in order to identify if it’s a CV joint we need to undergo a few physical tests first. Then we need to identify which side it is. The easiest and simplest way to do this is by making a sharp left turn and a sharp right turn. Drive to a big open parking lot and make a few figure eights and circles to eliminate which side it is. Turn sharp left and if you hear the sound on the left side, bull’s-eye! The same for the right.

We also isolate the CV joint by driving in a straight line under load. In a straight line, there is usually no sound or a very faint sound. When you coast left you won’t hear much. It’s only under acceleration in a corner that the sound is very audible. The clunking sound is usually in sync with the speed of the wheel rotation. Meaning, the faster you accelerate into a corner the faster the clunking sound becomes.

The CV joint is a finely engineered component with precise dimensions which includes multiple ball bearings stacked inside a metal casing. The ball bearings are covered in grease to lubricate and protect the bearings from excess heat build-up and from failure caused by high operational temperatures. The ball bearings rotate at thousands of revolutions per minute when you drive and steer the vehicle. The CV is located at the end of a front driveshaft and connects the wheel to the end of the driveshaft.

When the rubber bush cover of the CV joint tears or when the rubber perishes due to wear and tear, the grease meant to lubricate the ball bearings inside leaks out, causing the bearings to run dry and eventually wear out due to excessive heat build-up, friction and foreign objects entering the ball-bearings.

This is a common cause of drivers hearing a loud clunking sound emanating from the front of the 4-wheel drive when turning.

Next, let’s look at possible causes for the clunking noise when accelerating in a 4-wheel drive.

The drivetrain system of a 4-wheel drive consists of many small components. This is especially true for an IFS (Independent Front Suspension).  All the components are designed to keep the vehicle stable, assist with steering, and allow for articulating or to assist with vertical travel of the suspension control arms.

Let’s now look at each component separately to isolate where a possible clunking sound could be originating from. Let’s look at the U-joint.

The u-joint allows the driveshaft to connect to the diff at an angle and compensates for vertical and lateral movement of the differential while the vehicle is in motion.

If you are driving in 2H, which you should be if you own a part-time 4-wheel drive. This mode only engages the rear driveshaft and propels the rear wheels only. In this 2H mode, the front driveshaft in inactive as well as the front differential and all u-joints forward of the transfer case. It’s for this reason that you do not hear any clunking sound in 2H but only when accelerating in 4-wheel drive mode when the entire drivetrain is active and both front and rear drive-shafts are rotating.

If the u-joint rubber caps get damaged or wear out, allowing dirt and debris into the needle bearings inside the u-joint, it will cause the u-joint to fail. Also if the rubber seal perishes due to old age and all the lubricating grease runs out, the u-joint will fail.

The excess movement that results from play inside the u-joint causes a loud clunking sound under acceleration.

Another reason you could be hearing the loud clunking sound could be the front differential that has failed. This is probably the worst-case scenario, only second to the transmission failure. The front diff could fail due to a few reasons, some of which are:

Any of these reasons can cause massive internal damage to the gears inside the front differential.

The front diff can be isolated by disengaging 4WD mode and driving on 2H. If you don’t hear any loud clunking sounds under load and acceleration, then you know it’s a component forward of your transmission. This is excellent news! To make extra sure it’s not a u-joint or something else, If possible, remove the front driveshaft completely and try and physically rotate the differential by hand. If there is resistance, jamming up or excess play that’s a dead giveaway the differential is damaged.

Once you remove the differential and inspect the internals you could find metal filings inside the housing from teeth and other carrier damage. This could be caused by any of the following:

Depending on how bad the damage is, however the internal diff gearing will need complete replacement.

A damaged front differential is another reason why you could experience a loud clunking sound emanating from your 4-wheel drive.

This video is excellent and worth a watch

let’s inspect other potential drivetrain components that could result in loud metal clunking noises coming from the front of your 4-wheel drive.

This could result in excessive play and vibration only under load when a 4-wheel drive is engaged. Driving in 2H will isolate this part of the drivetrain and the clunking sound will not be present. Only once 4WD mode is engaged and under acceleration.

Other items that could result in clunking noises are:

Next, let’s look at why you could experience a clunking noise when engaging 4-wheel drive mode on the fly.

The following extract was taken from an article you can read here that explains why the clunking noise is heard when we engage 4WD drive on the fly.

When shifting into 4WD if the rear wheels are rotating it will grind and or bang, when it engages. This is bad news since you could potentially break teeth off internal gears inside the transfer case. Engaging 4-wheel drive while driving essentially locks the front and rear driveshaft’s together while one is spinning at a few thousand RPM’s and the other is stationary. In this instance, one of two things happen. By some freak occurrence, the splines mesh and everything starts turning together. That is when you hear a bang.

Below is an extract from an article explaining the drivetrain binding effect.

4 Wheel Drive Locks Up When Turning

This effect causes your vehicle to under-steer heavily, gears to get jammed and makes steering very difficult and even jerky. This phenomenon is caused by the front wheels battling the rotational force coming from the front drive shaft as it tries to slow down the front wheels, causing the massive under-steer effect. You should avoid engaging 4WD on a high traction surface at all costs. The longer you drive in that mode, you risk serious damage to your drive-train components and you will find it increasingly difficult to remove it from 4WD mode and switch back to 2WD mode.

If you have forgotten to take your 4WD out of 4H after heading back on to the tarmac you will definitely experience transmission wind-up after a while. One way to identify if you have transmission windup is, your vehicle being stuck in a gear. You can yank and hang on the gear lever but nothing will release that gear due to the immense forces and torque built up inside the transmission.

So how do you fix transmission wind-up? The easiest way to fix bind-up is by pulling over to the side of the road with two wheels firmly on the tarmac and the other 2 wheels on a slippery surface like grass, mud, snow or sand. This allows the wheels to rotate at altered speeds releasing the wind-up in the transmission box. Once the wind-up has been released you will then be able to use your gearbox/transmission properly again.

Extract taken from the article: Why Your 4 Wheel Drive Jerks and Feels Hard to turn in 4WD

There are multiple components responsible for the infamous clunking or knocking sound when driving in a 4-wheel drive or when engaging a 4-wheel drive on the fly. Take the time to investigate what the cause could be before you take it to a workshop. It could be a DIY fix that could save you hundreds. Also, think of the possible upstream and downstream damage that the failed component could have caused and the possible components that could have been affected. Try and identify what the initial cause of the failure was so as not to have a repetition. Isolate if the user was responsible for improper operation of the 4-wheel drive, intentionally or unintentionally. 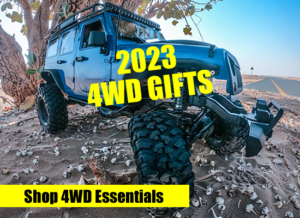